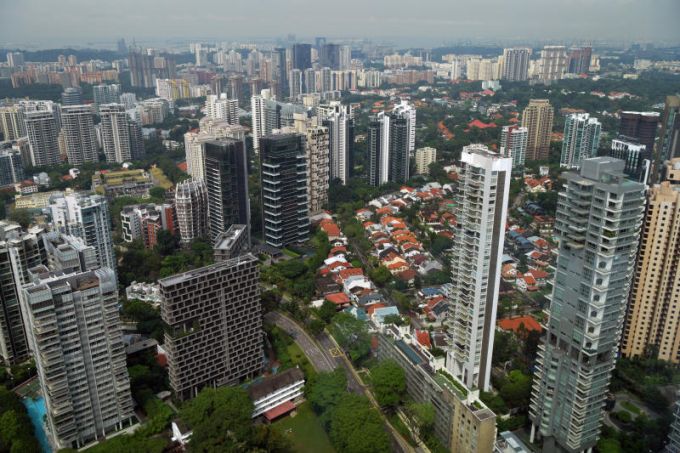 Overall rents of private homes were up 2.6 per cent in Q4, steeper than the 1.8 per cent rise in Q3. They gained 9.9 per cent for the whole of last year

THE Urban Redevelopment Authority (URA) said on Friday (Jan 28) that its private home price index rose 5 per cent quarter on quarter in Q4 2021, and climbed 10.6 per cent for the whole of last year.

These are unchanged from the flash estimates put out on Jan 3. Analysts had said then that the Q4 figure represented the largest quarterly increase since Q2 2010, while the full-year number marked the highest annual growth since 2010.

Knight Frank Singapore head of research Leonard Tay said the Dec 16 cooling measures were “timely and serve to keep the market from running away in 2022”, when viewed in light of last year’s private housing price growth.

He foresees “tentativeness” in sales volumes and prices of private homes in Q1 and perhaps Q2 2022, before strong underlying fundamentals kick in to re-establish homebuying demand. Overall private residential prices could rise 1 to 3 per cent this year, considering the new property curbs and interest rate hikes, Tay said.

Edmund Tie head of research and consulting Lam Chern Woon said that given the low unsold stock, developers are expected to retain pricing power, although the launch and sales volumes may ease this year. “The robust spate of take-up and dwindling inventory have provided confidence to developers and a sense of urgency in the market,” he added.

Huttons Asia senior director (research), Lee Sze Teck, noted that the impact of the new cooling measures has not been entirely reflected in the Q4 numbers due to the seasonal year-end holiday lull.

Landed properties’ prices gained 3.9 per cent in the fourth quarter, steeper than the 2.6 per cent increase in the third quarter, URA’s final figures showed. They jumped 13.3 per cent for the whole year.

This brought the price index for landed homes to an all-time high. Tay said: “Combined with the limited availability of landed homes, and with foreign ultra-high-net-worth families willing to pay rental premiums for such properties, the landed residential market will continue to draw strong interest in 2022.” He estimated that the landed segment’s prices may thus jump some 5 per cent this year.

As for non-landed homes, prices rose 5.3 per cent in the final quarter of last year, speeding up from the 0.7 per cent growth in the preceding 3 months. They surged 9.8 per cent in 2021. 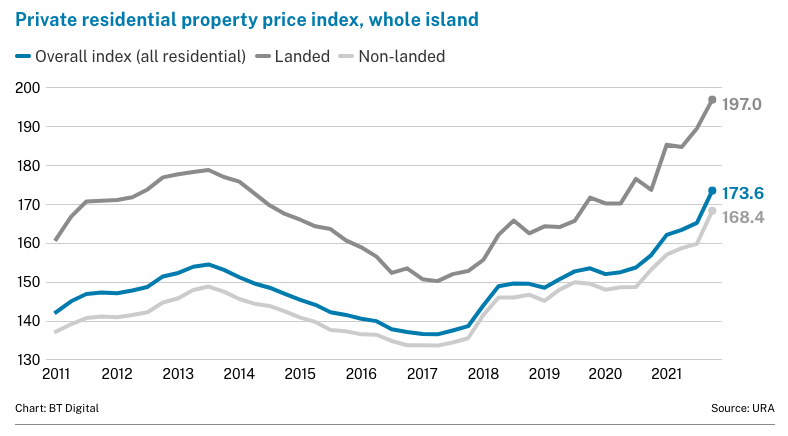 Giving a breakdown by region, URA said that non-landed homes in the core central region (CCR) or prime areas saw prices moving up by 2.7 per cent in Q4, contrasting with the 0.5 per cent drop in Q3.

In the rest of central region (RCR) or city fringe, non-landed properties became 6.7 per cent pricier, accelerating from the 2.6 per cent growth in the previous quarter.

And the outside central region (OCR) or suburbs posted a 5.7 per cent increase in non-landed homes’ prices for Q4, after inching down by 0.1 per cent in the prior quarter. 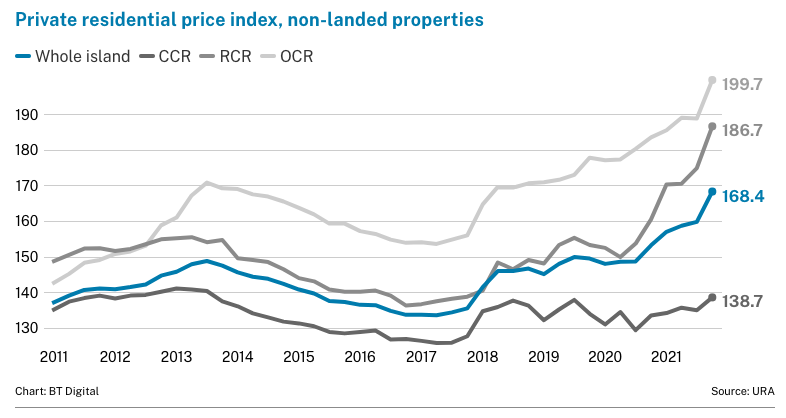 In the rental market, overall rents of private homes were up 2.6 per cent in Q4, steeper than the 1.8 per cent rise in Q3. They gained 9.9 per cent for the whole of last year, reversing from the 0.6 per cent decrease in 2020, URA said.

Nicholas Mak, head of research and consultancy at ERA Realty, said the residential leasing segment will be one of the brightest spots in the property market this year.

It is poised to remain strong in 2022, in part because the increased additional buyer’s stamp duty (ABSD), under the new cooling measures, will encourage existing Singaporean and permanent-resident homeowners to sell their current homes before buying the next residential property, Mak noted. After selling their current homes, some may either rent it back from the new owner or rent interim accommodation elsewhere before buying their next home, to avoid paying ABSD, he added.

“The alternative is that they pay the ABSD, which can be recovered from the Inland Revenue Authority of Singapore after they sell their former home. However, some owners may not choose this method because of the large outlay needed for ABSD,” Mak noted. Married couples may be eligible for refund of ABSD if they meet the remission conditions, which include selling the first residential property within 6 months of the second property’s date of purchase or temporary occupation permit.

Rental demand in both the public and private housing markets is also likely to rise when border restrictions are further eased. Mak thus projected the private residential rental index to increase by 7 to 12 per cent in 2022.

By property type, landed homes’ rents edged up by 1.2 per cent in the last quarter, slowing from the 4.7 per cent growth in the third quarter, and rose 8.2 per cent in 2021.

Non-landed homes’ rents moved up by 2.7 per cent in the fourth quarter, quicker than the 1.4 per cent increase in the previous 3 months, and soared 9.9 per cent for the whole year.

Wong Siew Ying, PropNex Realty head of research and content, reckons that the positive economic outlook as well as several “attractive new launches” that may go on the market will lend support to private home prices in 2022. Such potential launches include projects in Marina View, Northumberland Road, Slim Barracks Rise, Lentor Central and Tanah Merah Kechil Link, she said.

He added that the CCR also saw its best Q4 primary-market sales since 2010, with buyers scooping up 2,521 units from developers. This came as several new project launches in the CCR last year “did extremely well”. Midtown Modern sold 411 out of 558 units, Irwell Hill Residences sold 410 out of 540 units, while Jervois Mansion sold 104 out of 105 available homes, he said. Les Maisons Nassim also broke the record for the priciest penthouse in Singapore when its 12,077 square feet unit fetched S$75 million.

Half of the 10 best-selling projects last year are located in the OCR, based on caveat data downloaded on Jan 28, 2022. Lee attributed this to a buoyant Housing Board (HDB) resale market. 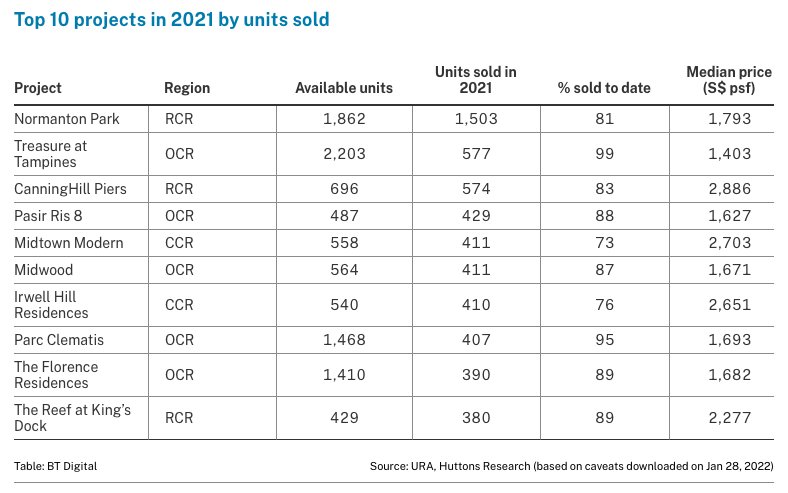 There could be around 700 new private homes sold in January 2022, based on Huttons’ tracking of developers’ sales. “The first launch of the year, Belgravia Ace, got off to a roaring start, selling more than 70 per cent of its units at its launch weekend,” he noted.

Belgravia Ace’s excellent performance suggests that there remains ample liquidity in the market, and that first-timers make up most of the buyers in the market now. Therefore, the impact of the cooling measures “may not be keenly felt this time”, he added.

No EC units were launched for sale in the final quarter of 2021, though developers sold 260 EC units during the period. The previous quarter had been livelier, with 496 EC units launched and 717 sold.

Mak said that although the new cooling measures could crimp resale volumes of private homes, the segment will continue to be supported by a healthy HDB resale market. As more flats reach the end of their 5-year minimum occupation period, the owners could upgrade to private housing and opt for completed condominiums in the secondary market, he added.